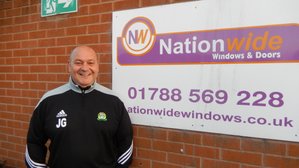 After over eight years in the dugout at Kirkby Road, Ginnelly departs with the best wishes of everybody at Barwell Football Club.

Having started out as a First Team Coach back in 2010, Ginnelly quickly worked his way up to becoming First Team Manager and has guided the club to two promotions, as well as its highest ever league finish and record runs in the FA Cup and FA Trophy.

His strong relationship with his players, staff, and particularly the fans, have earned Ginnelly a lot of affection across the club, the village and beyond.

Ginnelly now moves on to take charge of his hometown club Nuneaton Borough, where his passion, loyalty and managerial experience will give them the best possible chance of survival in the Vanarama National League North.

Barwell chairman Dave Laing said: "After recent discussions, it will now be formally announced that Jimmy Ginnelly will become Nuneaton Borough's First Team Manager. He goes with our best wishes and with thanks for all the work he has done for our club.

"His number two, Guy Hadland, will take charge of our playing matters over the coming weeks. More to follow."

Guy Hadland's first game in caretaker in charge will be this Saturday's trip to Stratford Town in the Southern League Central Division Premier.