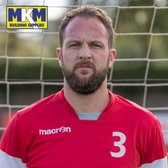 Foster boasts 351 career appearances on his CV, including 45 League Two appearances and 6 League One games.

He spent a period of time at Ilkeston and Coalville Town back in 2016, so knows the Midlands area well. We look forward to welcoming Luke to the club. He is in contention for his debut at Ashton United this Saturday afternoon (3pm).

Following the departure of Michael Townsend, the new club captain will be confirmed through our online channels before this weekend's game.