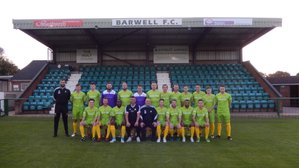 One in, one out at Kirkby Road

Baker, an 18-year-old striker, joins on loan from Kettering Town, who are managed by former Barwell manager Marcus Law.

Meanwhile, Ryan Seal has joined Market Drayton Town as he looks to get valuable minutes under his belt. Seal can be recalled by Barwell, should he be needed by Jimmy Ginnelly and Guy Hadland.

This news follows the recent loan signing of Nuneaton Town teenager Michael Tweed, which was confirmed last week. Tweed made his debut in Saturday's 4-2 defeat at Stalybridge Celtic.