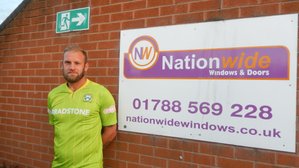 31-year-old Townsend has been a great servant to Barwell, leading the team with many dominant performances as club captain.

The skipper, who lives in Walsall, has opted for a move closer to home as he re-joins his former club Sutton Coldfield Town.

The club would like to place on record their thanks to "Towna" for his contributions (on and off the pitch) in a Barwell shirt and wish him all the best for the future.

We will announce the signing of a new central defender in due course, after Townsend's departure has opened up a key place in the squad.