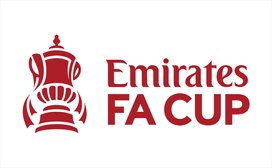 Barwell lose by a single goal in very wet conditions

Barwell exited the Emirates FA Cup away at Nantwich Town in wet and windy conditions. The only goal of the game came 2 minutes before half time and despite dominating the 2nd half, Barwell could not find the net.

After sterling work from the Nantwich grounds staff the referee deemed the pitch to be playable and this 2nd Qualifying Round game went ahead. The conditions almost caught Max Bramley out in the first couple of minutes when the ball did not run through to him as expected. He managed to recover and clear the ball for a throw in.

Jahvan Davidson-Miller had a couple of half chances in the early stages but could never quite bring the ball under control to make the final touch count. These were mostly as a result of good work out on the left by Eliot Putman and Kai Williams. Putman was involved at the other end on 15 minutes when his last ditch tackle stopped a shot coming in from an oncoming player. The ball had found its way out to the penalty spot area and the attacked was running in to the box but the Barwell defender read it well. Barwell counter attacked with Kai Williams but the move broke down.

Mwasile was dangerous all afternoon for the home side. He was a late change for the Dabbers having been announced as a sub on the team sheet but then starting the game. His shot on 22 minutes was saved by Bramley and the keeper recovered to claim the ball after his initial save saw the ball spill loose.

Nantwich were on top as the half progressed and they won a penalty when Mwasile was fouled by Micah Edwards. Lawrie took the penalty on 31 minutes but it was saved by Bramley who then secured the ball after it had spun up from his initial save.

At the other end Massiah McDonald had a shot that was curled up and over towards the top corner but lacked the pace to beat the keeper who claimed it easily.

The goal came on 43 minutes when Mwasile shot home. Stair crossed the ball across the box and it got a flick on by the head of Heath to land perfectly for Mwasile who hits it straight into the net from the far post.

Barwell came out for the 2nd half with a real energy about them. Sam Hollis replaced Massiah McDonald at the break and was invovled straight away. The chances started to build up for the Canaries. Brady Hickey headed a Putman cross straight at the keeper. Davidson-Miller then shot just wide after good work by Hollis out on the right but the net could not be found.

There was another chance for Hickey to head level but he didn't manage to test the keeper and he then saw a free kick saved by the keeper as the game hit the hour mark. Nantwich were not out of it and started to work themselves back in to the game as the half wore on and created some half chances.

However, it was Barwell who were the strongest in the last 15 minutes and started to really apply pressure to the Nantwich defence. Kai Williams shot wide and Putman saw a free kick well saved by the keeper.

At the end a Jamie McAteer header was deflected wide and a Hollis shot met the same fate. In stoppage time, Hollis again went close but saw his shot deflected over for a corner. Max Bramley went up for the corner but the ball was met by the head of Hickey who couldn't keep it down and his header went over.