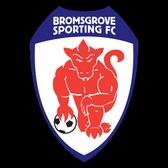 The visitors made an excellent start to the game and they had the ball in the back of the net in the second minute but the striker was adjudged offside. They continued to impress and went close again from a corner. Barwell hit back and with their first attack of the game in the 10th minute right-winger Beck-Ray Enoru beat his man and crossed the ball for the unmarked home captain Brady Hickey to head the opening goal from 6 yards.

After 19 minutes Enoru missed an opportunity to increase the lead when he was put clear by a long ball from Hickey, but goalkeeper Ollie Taylor saved his close range effort. On the 23rd minute Barwell’s Sid Kerr was shown the red card for his tackle on a Bromsgrove attacker in what was considered by some to be a controversial decision by the referee. In the 27th minute Bromsgrove were awarded a penalty when Melis Bushaj was deemed to have fouled Daniel Sweeney and the striker scored from the resultant spot kick. The same player went close 2 minutes later with an overhead kick from close range which went narrowly wide.

In the 7th minute of the second half Barwell missed a glorious opportunity when following a free kick by Kyle Rowley, Enoru broke clear on the right and crossed to the unmarked Bushaj only 5 yards out but inexplicably he put the ball over the bar to miss a great chance to give the home side the lead.

In the 62nd minute Barwell again went close when a brilliant long ball from Hickey found Jahvan Davidson-Miller in space and he put in an excellent effort from 20 yards which went narrowly wide. The visitors hit back and a great opportunity by Kai Lissimore went narrowly wide. Bromsgrove continued to impress and Lissimore went close with an effort from just outside the penalty area. The game ended with both teams having opportunities but a draw was a fair result in what was an entertaining match.