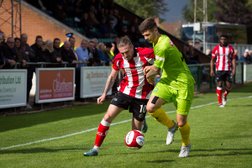 Canaries beaten by the better side on the day

On the back of 2-0 and 6-0 victories last week, Barwell suffered a painful 3-1 defeat at home to Altrincham on Saturday.

The game started evenly, with the visitors disappointed about the start they made to the game. Altrincham grew into the game quickly and were on top for most of the first half. Their first goal came on 17 minutes, when Max Harrop - who replaced James Poole in the starting line up at the last minute - swept home a rebound at the back post.

Altrincham's 100-or-so- travelling supporters made a difference to the game, and will certainly have given them a boost. The visitors' class was clear to see and they doubled their advantage five minutes before the break when Josh Hancock tucked home a great free-kick to double their lead.

Barwell made a double change at half time and fought back into the game well. This was rewarded shortly after the hour mark, when Kyle Perry slotted the ball home at the back post to reduce the deficit.

The Canaries had some great chances to equalise in the second half, through Eddy Nisevic and Ryan Robbins, and would have been proud if they had put in such a display from the start of the game. However, their efforts proved wasted as Altrincham substitute Tom Peers wrapped up their victory in the 95th minute.

Our post-match interview with Jimmy Ginnelly can be found by clicking here. We apologise for the poor sound quality during some parts of this video.