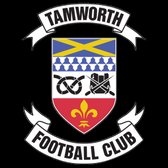 Barwell took the lead against Tamworth but left Staffordshire with no points after conceding two first half goals. Guy Hadland was full of praise for his team and felt they did enough to earn at least a draw. He said afterwards: "The lads worked hard and were a credit to the club. We got it right tonight but there are fine margins in football."

Jamie McAteer made his first appearance of the season for Barwell and it was his header from a corner that was the first chance of the game. The Centre Back had a good game and it was a fine battle with the Tamworth striker, Gerry McDonagh, that took place across the 90 minutes. It did not take long for the home side to create a chance and, the ever dangerous, Shaquille McDonald weaved through some defenders and shot just wide. He had been fouled on the way through by Jayden Cotterill who was booked as a result.

Barwell scored in the 19th minute with a great goal by Kai Williams. The lively winger benefited from some good build up play before being fed the ball by Brady Hickey out on the left hand side. He ran in to the box with speed and shot across the goal to the far post where the ball hit the upright and went in.

The equaliser came just 5 minutes later when McDonald struck the ball from the edge of the area and it went clean through a packed penalty area to cross the line. The ball had been cleared out to McDonald when Max Bramley punched a long throw out but it fell just right for the Tamworth man. There were some claims that Barwell should have had a foul rather than the throw in be awarded but the officials had other thoughts.

Chances continued for both sides as the half progressed with Williams looking dangerous on a number of occasions. There was also an undercurrent of niggly fouls and frustration with the referee that did spill over a couple of times. Twice the referee had to deal with the Tamworth bench and twice there were yellow cards as a result.

In the 39th minute Tamworth took a controversial lead. The ball was played over the top of the Barwell defence towards McDonagh who was in an offside position. The flag did not go up and the striker ran forward with Bramley rushing out to try and meet the ball first. Bramley did enough to make the header from McDonagh not be as hard as it might have been. The ball rolled towards the empty net with Jayden Cotteril chasing it hard but the defender could do nothing to keep the ball out of the net.

Barwell started the second half well and continued that throughout the 45 minutes. An early free kick tested Jas Singh in the Tamworth goal and Tristan Dunkley went close not long afterwards. There were also chances for Brady Hickey from a header and Massiah McDonald as Barwell knocked on the Tamworth door.

The McDonald chance may well have been the best of the second half. A cross from Kai Williams was zipped in and McDonald was poised at the back post to knock it in. The striker did not get the cleanest connection with the ball and hit the shot wide. It maybe summed up the evening for Barwell.

There was another golden chance when Brady Hickey managed to beat the offside trap only to see his header hit against the oncoming goalkeeper. The ball bounced off Singh and fell to Jahvan Davidson-Miller but he could only shoot wide.

The final whistle brought disappointment for Barwell but relief for Tamworth. The Canaries had certainly put in a lot of effort and created enough chances to head back down the A5 with a point.