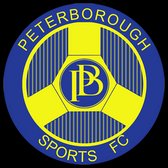 2nd Half Display Not Enough

A 2nd half performance to be proud of, with just 10 men, was not enough for Barwell to overcome the difficult start they gave themselves in Peterborough. A goal and a red card for Jayden Cotterill inside 10 minutes gave it the worst possible start for the Canaries and, with 2 more goals in the first half, it was too much for them to overcome.

On the back of the defeat to Alvechurch on Tuesday evening, Guy Hadland's men were looking to bounce back. The first few minutes of the game, even after the first goal had gone in, were positive for the away side. It was Sani who got the goal when he pounced on a cross from Moreman that was let loose by Max Bramley. Moreman had surged down the left hand side and crossed well.

Before Barwell could properly recover from this, Jayden Cotterill was sent off for being the last man and bringing down Mark Jones. There was very little the referee could have done differently apart from reach for the red card. Micah Edwards slotted in to the back 4 alongside Owen Bennett for the rest of the game.

The home side were dominant and brought out a good save from Bramley when he tipped a header over the bar after the ball had been powered in to the pitch to bounce back up and in. Peterborough Sports were looking dangerous every time they had a corner or free kick and could put the ball in to the box. The Barwell defence were far too generous with their marking for these set pieces allowing a number of headers to go close, with most met by the big Mark Jones.

The 2nd goal came from exactly this scenario when Malone headed home a free kick by directing the ball in to the far corner, way beyond the reach of Bramley. Just 3 minutes later the 3rd goal came when Lawlor stroked home a penalty, despite Bramley getting a hand to it. The penalty had been awarded for handball.

There was still time in the half for Sports to hit the bar as they continued to pile on the pressure.

There were 2 changes for the Canaries at half time with Kai Williams and Jahvan Davidson-Miller coming on for Leandro Browne and Massiah McDonald respectively. Those changes and, no doubt, some wise words in the changing room from Hadland helped Barwell to a much better 2nd half performance. The excellent travelling support will have been heartened by the fight that the side showed in this 45 minute period - there was no way that you could tell that one side had only 10 men.

Eliot Putman and Sam Hollis combined well on the left at times and Putman put in some good crosses. James Rowland, on his debut having joined on loan from Shrewsbury Town, had a fine game and never stopped running for the whole game. He also had a shot that forced Elsom in to a good save. Kai Williams caused problems, as ever, and went close with a couple of shots that were not far away from going in.

Sports were looking dangerous on the break and had chances themselves, including hitting the post from a header, but the Barwell defence stood firm and Bramley started to look like he wouldn't be beaten.

In the 87th minute Barwell were awarded a penalty by the Assistant Referee and it was for handball again. The referee had not spotted it but the mass of away fans behind the goal certainly had. Brady Hickey took it but Elsom was again equal to a Barwell effort and pushed the ball away for a corner. 1 minute later and it looked like an own goal had been scored by Sports, with Elsom saving it when many thought it had crossed the line.

In the end though, Sports had done more than enough in the first half to secure the win. As was the case at Tamworth and Nantwich Town, Barwell were much improved in the 2nd half. Again, like those games and others this season, there were chances to score that went begging and on another day at least 1 would have gone in. It was not, however, to be and Barwell suffered a 4th straight defeat with their first league win of the season still awaited.