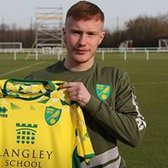 The Basford United FC Education Academy opened its doors in the summer of 2014.

The 2015-16 season saw the team progress to the First Round proper of the FA Youth Cup and the final of the Midland Youth Cup, where they lost to Walsall.

In 2019 Kole Lambert (above) became the programme's latest player to join a professional club when he signed a two and a half year contract with Norwich City FC.

Come and be part of it!

Our academy players train daily with UEFA B licence coaches and take part in weekly fixtures across a range of different competitions.

Players also get to compete in the FA Youth Cup, Midland Cup, National Colleges and Schools competitions and the AoC competitions. All players get access to a comprehensive range of fixtures across our different teams.

Alongside the training programme, players also have to study a full-time NCFE/BTEC Level 2/3 Diploma in Sport, will undertake vocational work experience in refereeing, event organisation, coaching and leading activities. You may also have to undertake mathematics and English if you have not achieved GCSE grade C in those subjects.

The Academy prides itself on high levels of investment from coaches which includes an ongoing individual development plan for players, player assessments to track their football development and also get support with strength and conditioning.

There are many different playing exit pathways from the Academy programme, these include going into the professional or semi-professional game such as our first team and/or community teams at Basford United.

A number of graduates have combined football and educational routes such University football and a sports degree programme like goalkeeper Jake Wood at Nottingham Trent University.

Other graduates such as Jamie McNicholas at Chowan University in North Carolina and Myron Duffy at Delta State University in Mississippi have gone on to USA University soccer scholarships and are having the time of their lives.

You will also gain a wide array of vocational skills that will equip you for a range of jobs in the sport and leisure industry or that are transferable for employment in a different sector.

In the last four years over 20 players have played for our Basford United 1st team and given the strong links between the Academy and the first team you have a great opportunity to impress and stake a claim every single day in training.

Are you the next academy graduate to our first team?