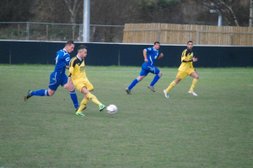 Former Aston Villa star Lee Hendrie made an immediate impact on his Basford United debut, scoring and setting up a goal in the 3-1 win over Armthorpe Welfare in the NCEL Premier.

Hendrie opened the scoring in the nineteenth minute, hitting home TJ Nightingale's pass. Fabian Smith doubled the lead after 37 minutes with a shot that took a wicked deflection.

In between the goals Armthorpe asked serious questions of the Basford defence and six minutes into the second period Stuart Preston brought the visitors back into the game with a superbly taken goal.

Basford needed another goal to make sure of the points and it arrived four minutes from time as Hendrie broke down the left and crossed for Jamie Walker to hammer his shot low into the net.

Basford boss Martin Carruthers said "We were very pleased with the first half, in which the players did everything we asked of them, the only disappointment being that we were didn't score more. The two new players, Lee Hendrie and Sam Craven, made excellent debuts. We have made great progress in building the team and are now close to where we want to be."