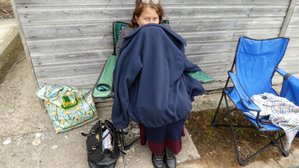 Catches win matches and the Hospitals rue their missed chances

Jackie Hatcher had to hide her disappointment and take shelter from the elements, as in the words of the 16th century English playwright John Heywood, “It’s an ill wind that blows nobody any good” and this was the case on a blustery day at Claverton Down where Bath Hospitals CC entertained the travelling Swindon Xl at the Sulis Club.
Swindon arrived with a new looking side from last season, but they maintained the services of that old campaigner Andy Mildenhall who still can put the ball “on the spot” when he wants to. Winning the toss, Hospitals skipper Toby Patrick asked Swindon to bat and the opening bowling attack of Stuart Webb-Martin and Dan Hatcher did not disappoint. Webb-Martin with pace and Hatcher with good old fashioned “Line and Length”, made the Swindon batsmen struggle for runs, as the not so desperate Dan Hatcher conceded just seven runs in his first seven over spell. When Webb-Martin bowled opener Parker (8) and Hatcher had the other opener Davel (15) caught it was the time to introduce the spin twins in the form of Jon Fair (9-3-38-1) and Jake Dyer (9-1-29-1) turned the screw and Swindon found themselves at 105 for 2 from 30 overs, although the Hospitals were in command Swindon had wickets in hand. Skipper Patrick brought himself and Rhys “Romeo” Redman on to bowl and they both struggled, bowling too short on a wicket set up for the pulled shot, and the Swindon batsman took full advantage as in the final 15 overs they scored another 118 runs and set a total of 224 to win. There was some memorable fielding from Toby Patrick, Stuart Webb-Martin and Jake Dyer, but with five dropped catches, the Hospital fielding at times, was woeful.
Andy Boyce and Jon Fair took guard and in the third over and hurrying for runs Fair was bowled for just four. Boyce was joined by Captain Patrick and a dogged resistance was the order of the day. Boyce facing his 32nd delivery and having scored 14 was bowled by a Yorker of the bowling of Nagal. Div Puri came in at number four to join Toby Patrick and the pair were resilient against an excellent spell from the Swindon bowling of Foreman, Nagal and McNeal. The pair put on a partnership of 81 runs when Patrick (45) lost all senses and skied a ball that was needlessly hit in the air as the pair were easily up with the run rate. An all familiar tale emerged as Haydon (15) Calgie (1) Dyer (4) and Webb-Martin (1) who was brilliantly stumped down the leg-side by keeper Baker. The Swindon team were “cock a hoop” and rather too vocal for the purists within the game, it reminded me of my 5 years in several of HMP Prisons (at my pleasure and not Her Majesty’s) when the prisoners on “A” Wing mixed their jelly and blanc-mange with “Spice” and ran around screaming like a demented kindergarten. The crafty old fox Mildenhall added his two cubs Chevis and White and put the Hospital innings to the sword and they were dismissed for a sorry 159.
The season so far has been one of interest for the Hospital eleven. To a man, they all enjoy playing in a better standard of cricket, with tougher games that are more competitive. As a small squad of players, the side misses two key bowlers, Jon Hooker and Matt Walker who are injured and yet to play this season, they make the balance of the side so much better. The squad has been strengthened with the inclusion of Div Puri and Robin Smith. They also need to be tactically aware and the right field placings need to be considered. Finally, individuals need to look at their game plan and match it to the scoreboard.
The one thing they have “oh so right” is their social element. If anyone is going to A&E it won’t be for a pulled fetlock, or in Jake Calgie’s case, a quad strain? It will be for an excessive indulgence of alcohol, namely Cheddar Valley, Thatcher’s and jaeger bombs. See you all on Saturday.