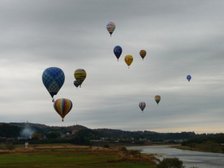 1. The Role of the Observer

Observing is a first–rate way for anyone interested in ballooning to see the best in action; for people who crew for just one pilot to widen their involvement; for new and prospective pilots to continue developing their skills by watching how good competition pilots operate; and for those who have no intention of becoming pilots to see how expert crews function.

Obviously the Competition Director and the team of officials cannot be everywhere with all the balloons during the course of a flight. This is where the observer comes in. You are there to be the eyes of the director, note all that happens, and report back. Purely that. You should know the rules, but it is never your job to interpret them.

Your most important job is to identify and record the position of each marker. Sometimes you will be expected to do this from the ground, and you will be taken around with the team in the vehicle. They should do their best to keep you in contact with the balloon.

If the markers are easily found, you may well measure them as you go. There will be other occasions when the pilot will invite you to fly, and you will observe marker drops from the air, and go back to measure their position after the flight.

In the UK each pilot has to provide an observer for each competition. Many pilots have their own regular observer, but some use ‘freelance’ observers. At every pre–flight briefing, each observer is allocated to a pilot (but never the one that he or she has come with, and usually not to a pilot you have observed before at that competition).

In most other countries, and at international competitions, arrangements for observers are independent of pilots, though their function is the same.

In simple terms, the observer’s job is to monitor the flight, record and measure where the markers land, and report back to the Director via Debriefers. In practice the observer has a form to fill in, which is largely self–explanatory. There are boxes for the time inflation started, time of take–off and so on, and spaces for diagrams to show where markers landed, how they were measured, and finally to show where and when the balloon landed.

If you are lucky you are able to make a direct measure to the goal, but if the marker is too far away, you have to be able to pinpoint the marker relative to some other suitable feature on the map. In practice this is not usually a problem, and GPS is commonly used now.