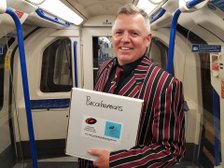 Beccs were invited and attended the first ever Saracens Club Partnership Community awards along with the top 40 other clubs whom are also recognised club partners (Beccs currently in joint 17th place).

The evening was informal with some Q&A with past and present Saracens players and the backroom staff that Beccs deal with.

Mike Hamm developed the role back in late 2016, after an initial introduction by Diane Benham.

The partnership has grown from strength to strength over the past two seasons, thanks to the various age group coaches, players and parents attending festivals, camps and premiership matches. Beccs have also hosted a Saracens rugby camp, as well as the unity parade at both Wembley and The London Stadium, aswell as playing on the pitch at Allianz Park and Twickenham, all of which has seen many Beccs players, coaches, and parents enjoy various fun filled matches either playing or watching.

Beccs have also significantly benefited from the cash back incentives, last season and this season we have utilised the option to double the payback in the means of kit via Saracens through Gilbert, saving the club on the expense of purchasing new equipment and rugby balls.

At the partnership awards, Beccs where given their Saracens Partnership Plaque, which will be installed in a prime position within the club showing that Beccs are a partner club. Beccs where also given a Silver status for their commitment to the partnership to date which we hope in time will develop even further.

Due to our silver status, the club have already secured a Saracens academy player to attend and assist training session for our minis at home on Sunday 16 September 2018.

We thank all our players, coaches, parents and supporters for your continued support, and Mike Hamm for all your work liaising with Saracens.