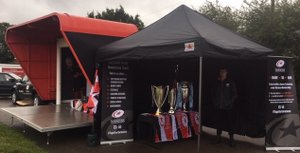 Photo opportunities for all festival attendees with the Saracens' European Cup, Premiership and Premier 15s Trophies

There will be a branded vehicle and trailer for anyone at the festival to come and say hello with facilities for photo opportunities with the European Champions Cup, Premiership and Premier 15s Trophies, chat about anything Saracens including membership packages, game tickets, festivals and camps. Sarrie the Camel may also make an appearance !

Beccs have had our grassroots and premiership club partnership with Saracens since December 2016. Hosting a number of school holiday camps, attending festivals, playing on the Allianz Park and Twickenham pitches at half term, and the pitch parades at Wembley and The London Stadium.

The photography booth is open for people to get involved with share on social media with the hashtag #togethersaracens to enter the draw to win a either a No 10 membership worth over £80 or 1876 membership worth £120.

As well as chatting about Saracens new memberships, Saracens will also be selling merchandise including boot bags, home and away kit (juniors), Rucksacks, Teddies, water bottles and mini balls.