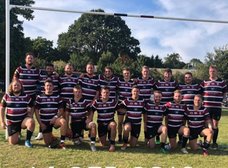 It was a glorious day at Sparrows Den on Saturday and the spectators wilted under the September Sun. Some found it too much and sought shade under the trees.
Both teams put on a very competitive game in the blazing Sun.
Beccehamians opened the scoring within 5 minutes of the start when Mary charged down a kick in the Betteshanger 22 and Freddie Buckle ran in a try from 7 metres out. Paul Broadhurst missed the difficult conversion. 5-0
The play was fairly even for the next 10 minutes but the D &B right wing did show a good turn of pace when he was given the opportunity.
Eventually D & B were awarded a penalty just outside Beccs 22 which they kicked. 5-3
After 35 mins Beccs hit back when Paul Broadhurst kicked a penalty to extend the lead again to 8-3.
Beccs wing Sam Edwards pulled a muscle and was replaced by Jordan Souter and at the same time the other subs came on.
On the stroke of half time Jordan Souter scored a try which was not converted to make the half time score 13-3.
After 5 mins of the second half Beccs were awarded a lineout 12 metres from the D &B line and the forwards drove the ball over the line for Callum Buckler to score. Paul converted this try to extend the lead to 20-3.
Freddie Buckle had put up a few high kicks which the D &B full back had not dealt with well. Eventually he dropped one and Scott Macaulay picked it up and ran in to score under the posts. Paul converted to make it 27-3.
D & B had the better of the next 10 minutes and they ran the ball from within their own 22. The ball ended up in the hands of the right wing and he outpaced the defence to score a try which was converted 27-10.
Beccs came back and Paul Broadhurst burst through to score a try under the posts and he missed the conversion. 32-10
D&B were not finished and came back again to score another converted try to bring the score back to 32-17.
D&B kept trying but eventually Tim Mackavanagh intercepted a pass just inside their half and ran into to score under the posts. This made amends for the scoring pass he dropped with the line at his mercy 10 mins earlier. Also Paul converted this try under the posts.

Altogether both sides contributed to an entertaining game. The only complaint from the spectators was it was too hot.
Thanks to ref Simon Goatcher for keeping up in the heat.