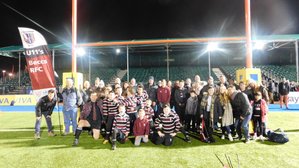 Beccs Under 11s had the honour of playing during the Half time of Saracens v Exeter at the Allianz Park on Saturday 7 January 2017.

A fabulous day out for the Beccs Under 11s squad and supporters. Leaving the club just after 11am, with several layers of clothing, packed lunches, and some light refreshments, 54 on the coach (27 adults, plus 27 kids of which 14 playing) made a real day out of it.

To allow more game time we agreed to play 12-a-side, 10 minutes one way which was excellently refereed by the Saracens Community coaches. The enthusiasm and focus was clear from the start from both sides, keen to enjoy the limelight and impress the vocal 10,000 fans and a certain Eddie Jones in the ground.

A brilliant, close, fair and very evenly contested game where everyone got stuck in, communicated well and showed that with the right application we can play good rugby. Max ran in the only try of the game, spotting a gap in the defence, running hard and straight to the delight of the supporters and fellow team-mates. All the kids were understandably and rather positively buzzing even more by this point !

After the Sarries game concluded, we played around on the pitch for a while, took some group photos before heading back onto the coach, where the standard singing, started by the kids, and great atmosphere continued. The day aptly concluded with 24 Beccs in the Sonargaon, and a few more light refreshments may have been consumed in celebratory style.

Such an amazing day and experience for everyone thank you for all your support, the kids were also impeccably behaved throughout, very proud.

"Just a quick note to say thanks to you and your U11s for an excellent, albeit very quick match on Saturday !
Its a shame we couldnt play for longer as it was turning into a good contest between two quite evenly matched teams I thought
I hope your U11s enjoyed the day as much as ours did, the number of smiling faces tells me it was an enjoyable experience for all involved
I wish you and Beccehamians U11s the very best for the rest of the season and I hope our paths cross via rugby again in the future
all the best !
Billericay Bees U11s Team Manager"