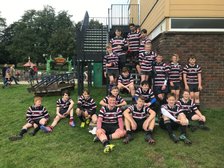 12 man OEs matched on the pitch by Beccs with 5 man scrum & full back line.
Despite going down to an OE converted try inside the first minute. A totally fab recovery , competitive game and moreover collective team performance, where everyone worked for one another for the common goal. Maturely skippered by George & Ellis. Man of the match to Jake for his work rate and efforts throughout the game, and of course our resident man in the middle, Al for refereeing.
Very proud of the entire squad , bravo boys