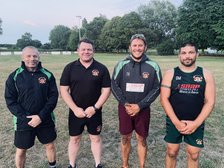 We are delighted to confirm the appointment of Rob Burling to the senior coaching team as ‘Senior Backs Coach’ for the 2022/23 season.

Rob has played competitive rugby since he was 8 years old, starting off at school in South Wales, playing against players like Rob Howley (awful) and Scott Gibbs (amazing) at that level. (The brackets were Rob’s own words)

Rob was about to sign on for Bridgend Athletic RFC but decided to join the RAF instead. Whilst in the RAF he played all around the UK with his station. Rob then left the RAF and picked up rugby again with Brammers Invitational XV, of which he played in tournaments in France, the Dubai 7's and Cwmtawe 7's.Whilst in the RAF, Rob also got a season of rugby league under his belt.

Locally, Rob has played for the Apache’s, then on to GY Broadland and then finally at Norwich RFC where he finished his playing career.

Rob has a wealth of knowledge of all positions in the backs, having played in every position there however he has admitted that scrumhalf is his favourite position, with fullback a close second.

Head Coach, Aaron Swanborough, commented on the appointment “This is another big appointment for where we want to be as a club. We promised the players that we would bring in these coaches to help us collectively improve and with this appointment we certainly have added to that growing momentum”.

Following this appointment, the full coaching/ leadership structure for the 2022/23 Season is as follows: