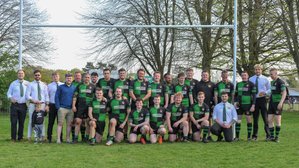 The Bulls picked up the points in a hard fought contest at home to a well drilled Diss 2 XV.

Diss took the lead after finding space in the corner, a conversion gave Diss an early lead. However, Beccles kept calm and composed and took the game straight to Diss. The pack were punishing and fought hard to work their way into the Diss 22. Whereby SHUCKSMITH was clinical and aggressive with his ball carrying and scored the Bulls first points of the match.
The rest of the first half was contested well by both sides. With discipline ultimately costing both teams of valuable territory and possession.
KELLY made two superb last ditch tackles to prevent Diss from scoring.
At half time, the score was 7-10 to Diss.
Head Coach SWANBOROUGH was very clear at half time and stated that the Bulls needed to be more clinical.
And the Bulls just did that. BALDRY came on and immediately made an impact with strong carries which pushed Diss further back, giving the Bulls good territory.
Clinical kicking from HARMER put the Bulls level shortly after the restart.
The pack dominated the scrum and after 10 minutes of the second half, the Bulls pushed Diss onto their own line. Whereby, BURLING took the ball of the back of the scrum to score a simple try, thanks to the work of the pack.
The Bulls took a 17-10 lead.
The Bulls continued to push Diss back. Superb work at the breakdown from GEDNEY and MAEER gave the Bulls the opportunity to kick for territory and have the ball in their hands.
The Bulls were denied two tries by the referee after Diss held up the ball on the try line, after an outstanding break from WALKER which gained over 50m.
HARMER and MORTON both victims of having a try taken away from them.
However, the Bulls kept on dominating. KNIGHTS, MORTON and PITTS were superb in the front row and this ultimately gave the Bulls their third try of the match. A Bulls scrum allowed GOONEY to pick and go over the try line from a few metres out. Putting the Bulls 22-10 up.
A late try from Diss put the score to 22-17. But it was to be the Bulls day. Strong defence in the last few minutes of the game led to Diss knocking on and the ref blowing for full time.
A solid and hard thought win which was well deserved. Man of the Match was awarded to KNIGHTS and was thoroughly deserved as a catalyst in the pack
Next week the Bulls travel to Great Yarmouth Broadland and will hope to make it 2/3 wins.
Share via
FacebookTwitter
https://www.pitchero.com/clubs
Recent news