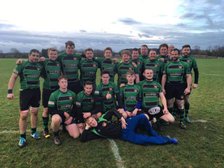 Beccles secured the Eastern Counties 1 North title with a clinical win at Wymondham 2nds on Saturday. They controlled the game and scored at regular intervals to win the game by 55 – 10.

Beccles went in to the game knowing that a bonus point win would secure them the league. They were able to field a strong side and were looking for a fast start to get on top of the game early.
Wymondham started with a spell of possession but when Beccles forced the turnover they quickly got a score on the board. A solid lineout put Beccles on the front foot and the ball went wide with Suchy finishing off the move in the corner.
Beccles continued on the front foot and two tries form Holtzer and one from Hannam quickly secured Beccles the bonus point they needed before half time.
Beccles stepped up the pace, led by Skipper and Man of the Match Gedney. Having recently returned to the back row after a spell playing in the backs he was on fine form, rampaging through the opposition defence on a number of occasions.
There was time for one more Beccles try from Hannam before Wymondham replied with one of their own to give a half time score of 29 – 5.
The second half continued with Beccles again dominating. Hannam completed his hatrick before a second for Suchy. Kauri added another and Sisley produced a classy finish to complete the scoring.
Wymondham to their credit never gave up and produced a final try of the game in injury time to complete the scoring. The final score was 12- 55.
So Beccles have won the first phase of this years league and now move on to the second phase in good spirits. They will be now competing with the top two teams from the South and West sections of the league to see who get promoted to London 3 Eastern Counties. They have a three week break before the league starts again and will be working hard on the training pitch to be ready for the next stage.
The second team travelled to Lakenham with the help of a few borrowed players they competed well for 50 minutes before Lakenham pulled away to win by 43 -10 .
Share via
FacebookTwitter
https://www.pitchero.com/clubs
Recent news