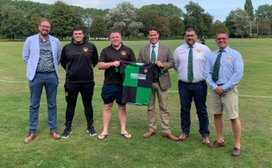 Beccles scored a late try to win their opening league game of the season. Wymondham 2s were the visitors as Beccles won their first competitive game since March 2020 by 25 – 21.

Last season Beccles had found sponsorship for a new set of playing shirts for their first and second team. With no rugby due to Covid the shirts finally made their debut on Saturday. B&B Skips were the main sponsor on the shirt and Julian from B&B Skips was presented with a replica shirt at the lunch before the game. Additional sponsorship was also received from Bespoke Scaffolding, Nibbleze and Delta Fitness. The club would like to thank all for their contributions.
The club also lost one of its founder members, Ray Hadridge, last year. The shirts feature his initials above the club badge in tribute to his contribution to the club.
This was the first league game for new captain Jack Baldry. There were debuts for Jack Walker, Joe Wicks and Harvey Wallis. Beccles also had new coach Aaron Swanborough on the sidelines after his first week with the club.
The game started as a tight affair with both teams turning the ball over and not really getting their attacking play going. It was Beccles who finally opened the scoring. They went deep into the Wymondham half and Armstrong spotted the space down the blindside and went over for the opening score. Gedney added the conversion.
A bad injury to Ashdown disrupted Beccles as he headed off to hospital with a dislocated knee. It was Wymondham who scored next with a converted try bringing them back level.
Gedney put Beccles back in front with a penalty, but it was Wymondham who finished the half stronger with another converted try to lead 10-14 at the break.
Beccles started the second half well and were soon back in front with a try. A good drive into the Wymondham 22 from the pack put them on the back foot. The ball was quickly fed wide and Walker went over in the corner.
They kept the pressure on and a kick out of defence by Gedney landed in play. Wicks showed his blistering pace and collected the bouncing ball and was sprinted clear to score in the corner.
Wymondham came back into it though and missed tackles allowed their scrumhalf in under the posts. The conversion put them one point into the lead.
There were ten minutes left. Flyhalf Gedney was struggling with broken ribs but there was no fit sub and he had to soldier on. Beccles had to kick more to compensate. With time running out one such long kick into the Wymondham half was chased up quickly by Wicks. He put in a good tackle and forced the turnover. The ball was quickly recycled and Walker was able to get over for his second try.
There was just enough time for the restart but Beccles collected the ball and worked it in to touch to seal the win by 25-21.
Beccles were pleased to get the victory but know there will be a lot to work on a training this week and know that they can perform better. They travel to play Norwich 2s on Saturday.
With a long list of players unavailable the 2nd team were not able to fulfil their fixture at Lakenham on Saturday. With many players hoping to return in the next few weeks the 2nd team will also be hoping to kick off their season. Any players wanting to come along and play for the club please contact Keith Johnstone (07788 430625, kjohnstone1503@yahoo.co.uk) or come along to training which is Tuesday and Thursday at 19:30.
Share via
FacebookTwitter
https://www.pitchero.com/clubs
Recent news