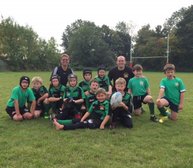 Good first game of the season for the minis.

Brilliant first performance from the under 11/12 squad. Two wins and one loss against a very strong Wymondham team, the hard work is paying off! Some great tries and really good defensive work. Lot of promise shown and really starting to gel as a team. See you next week for training at home. Well done from one proud coach!
Under 10s played at Wymondom today. The whole team played extremely well, some excellent passing, tucking and tackling. Man of the match was a very hard call as of the 10 player all displayed improvements in their game. However there had to be one and it was deservedly Ben Adams for his commitment to the ruck and going into contact with ball in hand. A proper forward in the making.
Under 10s in action against Wymondham today 1st game with 3 player scrums rucks and mauls fantastic start for the season winning there 1st game 35-5 then having a quick break before playing a different Wymondham side great effort just losing 20-10 another quite break before playing a shorter game only just beaten 15-10 fantastic play by the whole team with some crunching tackles geart running rugby passing yes passing brilliant rucking especially by man of the match Ben Adams superb clearing out time after time well done Ben great support from all the parents cheering the team on.
So, the U9s have got their first full contact match under their belts and what a great performance they gave against Wymondham. Each and every one of the team got stuck in and put in some lovely crunching tackles and we had some barn storming runs through Wymondams defence. Congratulations to Thomas Suppple for his MOTM performance putting his body on the line time after time.......just like England didn't. See you all next week after the aches and pains have gone away
Well done to the under 7s and 8s who played at Wymondham today.
You did me proud!
I was very impressed by the handling today, MUCH better than the past few weeks training. Tagging was done with a lot of commitment and with great success. Lots of forward running and weaving, tries from everyone!!
It was nice to hear parents pleasantly surprised by how much you've improved
Excellent performances from everyone.... You all played brilliantly!
Lets keep it up!
Share via
FacebookTwitter
https://www.pitchero.com/clubs
Recent news