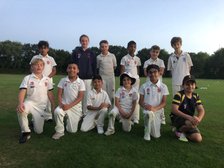 Beckenham's U10 Cup campaign ends at the Final

A team of 10 players took to the field in the Final, thanks to a talented squad of 19 players to see Beckenham get there!

Back in June, the U10 Cup team began its Cup campaign away at Old Elthamians.

On a Saturday afternoon, with the temperature topping 30 degrees, Beckenham won their Pairs match by 30 runs with a mixed team of 10 players from years two to six.

The next fixture against Blackheath in July saw an even more comprehensive victory as the team moved on to the semi-finals away at Sidcup on a warm Saturday morning in August.

Further changes in the team line up were necessary as several of the senior players were away, and less experienced or younger squad players were brought up and asked to play their best cricket.

This was an epic match that went down to the last ball of the last over with a run out and an incredible one run victory, thanks to a never say die attitude by every player.

It was pandemonium on the pitch and the boundary as the players and parents celebrated what had looked like an improbable win against a strong Sidcup side.

Into the Final on Tuesday 7 September against the Club's close rivals Bromley CC, held at Bromley Town.

Bromley won the toss, opted to bat and posted 279 for 6. Beckenham's team work in the field was excellent and Beckenham went in to bat needing 280 to win.

By the end of the 16th over, Beckenham were 51 for 6 and just head of Bromley's position at the same stage in their innings.

The light was fading slowly as the pink ball passed between Bromley's final, two bowlers for the last four overs, taking two wickets and a run out as we battled to hit 29 to win.

Bromley emerged victorious, and all the coaches, managers and parents congratulated both teams for providing an absorbing match to watch.

All the U10 Cup squad will be back in the U11 T20 and Pairs squads in 2022 season more experienced, with a good block of winter nets and pre-season matches behind them.

We look forward to another tilt at the Cup then with several of the 2021 squad and new players moving up over the winter too.