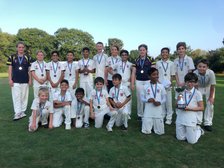 U11 teams went to Bexley for cricket, fun and success in the sun

Tired, but happy, Broncos and Bears with their medals and Cup

The Bexley Festival on Sunday 5 September brought an end to the U11 Festival season for 2021.

Beckenham took two teams - the Broncos and the Bears - featuring players from our four U11 Pairs and T20 teams.

The tournament started with a few fielding and batting errors, addressed during the opening match, before several champagne moments with the bat, ball and in the field.

Both teams then hit their stride, under the watchful eyes of their managers and vocal supporters, winning all their pool games on the way through to an all Beckenham Cup final at which the Broncos defeated the Bears.

For several of the players, this was their final match at U11 as they move into the U13s next season. For the majority of the other players, they have two years or more at U11.

Congratulations to all the players. We look forward to helping their development - with the rest of the Juniors - into 2022 and beyond.