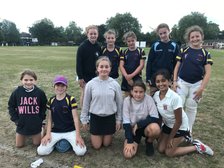 The Girls' natural (some may say superior!) communication skills were crucial in securing victory
Suzy Masson, U12 Girls Lead

The 2020 season saw many firsts as the Junior cricket section worked hard to deliver as much cricket as possible.

In August a truly remarkable match took place: for the first time in the Club's long history, an U11 Girls side was fielded against a Boys team (from HSBC), in a competitive, hardball Pairs fixture.

The HSBC team opened the batting. Beckenham were alert, walked in, kept singles to a minimum and backed up where needed. There were strong bowling performances across the team. By the end of the ninth over, the team had taken six wickets. At the end of HSBC's innings - which finished on 267 - the Girls had taken eight wickets (5 bowled, 2 run outs and 1 catch).

Beckenham’s batting performance was solid. The first pair scored 20 runs off the bat between them. The following batting pairs kept up the pace, but lost wickets along the way thanks to some strong HSBC bowling, which kept the runs down.

The final pair arrived at the crease with 26 needed to win at just under seven runs an over. After 19.5 overs, it came down to the final ball of the game. Two runs needed to win...

Emotions were running high - on and off the pitch!

The Beckenham Girls gathered in a tense huddle on the boundary as HSBC's bowler ran in. He delivered a straight, quick ball, which was pounced on and cracked away towards the boundary. Despite the efforts of the nearby fielders, the resulting four runs brought home victory for the girls, who finished on 270!

Beckenham won the respect of the HSBC team - the boys were the first to congratulate the girls - and parents of both teams rose to applaud and cheer the players off the pitch.

It was a great game of cricket which went to the wire. The girls held their nerve throughout and produced a stunning team performance the whole club is very proud of.

The Girls Section at Beckenham starts at U9s and runs all the way up to U15s with several girls migrating into adult cricket in the past couple of years.

The development of Girls cricket continues to grow at every age group, from softball to hardball. Opportunities to play competitively in girls teams (or boys teams up to U15s) also continue to grow in the North Kent leagues.

For any further information about Girls cricket at Beckenham, please contact Alan Peters on alanpeters923@btinternet.com