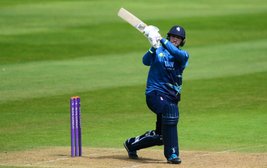 "it had been an absolute privilege to witness this fine match and one of the greatest innings to be played on the famous old ground."

Foxgrove has witnessed many memorable matches in its 153-year history, and another took place on Saturday against old rivals Bickley Park, fresh from their demolition of Champions Blackheath last week. Beckenham welcomed back Alex Blake who had played against Surrey during the week at the local County ground.

Park skipper Dan Magin won the toss and opted for first use of a good-looking pitch while the scorers, old friends from many years ago, settled down in the scorebox for an afternoon of swapping cricketing trivia! He may have had second thoughts after another incisive spell by Stuart Binny shook them on 27-2. First to go was Sussex’s Ollie Robinson nicking an outswinger to James Balmforth and then Alex Fullarton was nailed leg before. Alex Darroch and MCC Young Cricketer Safwaan Imtiaz then set about putting matters to rights with the latter looking a very stylish batsman. Shojib Ali, replacing the out-of-sorts Will MacVicar, then trapped Darroch in front for 11. Beckenham now had their tails up but the incoming Dan Magin had different ideas. Between them, the two visiting batsmen moved swiftly through the gears as some of the home bowling was found to be wanting. Home skipper Alex Senn rang several bowling changes without managing to find a way through with both Park batsmen notching splendid fifties in 58 and 65 balls respectively. With the score standing on a threatening 169-3 from 34 overs, Binny returned to the attack and immediately struck gold by having Imtiaz leg before for 64 and, in his next over, castling Magin for 66. Warren Lee and Adeel Malik launched another stand of 51 in quick time before the reintroduction of Johan Malcolm’s off-spin sparked a spectacular late-order collapse with four wickets falling in his three overs, Will MacVicar taking three fine boundary catches and another by Alex Blake. For the home side, Binny (4-35) and Malcolm (4-43) shared the bowling honours. On a fairly slow batting surface, the target of 255 would take some getting against a strong bowling attack.

The home reply did not start well against Sussex seamer Ollie Robinson and Warren Lee with the former making two early inroads to remove Senn and Will MacVicar. There were, however, encouraging signs that new opener Finn Bryan was showing improved solidity and he gave good support to Alex Blake. As the Kent man settled in straight away, playing within himself and pushing the score along nicely, a sense of expectation settled on the spectators, the numbers of which had grown considerably. As the master leg-spinner Malik plied his trade from the pavilion end, Blake reached an excellent fifty from 59 balls but then lost his partner Bryan who was bowled for 22 with the stand having been worth 69. Stuart Binny fell next when he was bowled by Magin pushing forward and suddenly things were not quite so rosy at 118-4. Johan Malcolm gave fine support to Blake before holing out to Alex Darroch on the mid-wicket boundary off the returning Robinson and, with Ollie Barnes and James Balmforth falling in quick succession to leave the home side staring down both barrels at 151-8. There was one ray of hope, however, as the imperious Blake remained rock-steady at one end on 64. But, in aviation terms, if ever a squadron leader was in need of a trustworthy wingman, that time was now.

Enter Rob Clements who was about to write himself into Beckenham Cricket Club folklore. Showing excellent technique and a willingness to push singles in order to get the Kent man on strike, a crucial stand began to manifest itself with, very gradually, Blake unleashing some of his famed heavy artillery as he reached a magnificent century from 118 deliveries. As the 200 was passed in the 45th over, the target was still a fair way off but Blake was, by now, completely unstoppable. Magin and Robinson were unable to part the Beckenham pair and Blake had victory in his eyes as handed out a savage battering to the Park captain to bring up the final over to be bowled by Lee with Beckenham’s score on 251-7. A single dot ball and then Blake struck yet another massive six to clinch victory with the sheer joy displayed by this most popular of cricketers, arms aloft and brandishing his bat, was not lost on the assembled crowd gathered in front of the pavilion who warmly greeted their hero as he returned with the trusty Clements whose splendid undefeated 21 had enabled the miracle to happen. For the statistically-inclined, this 8th-wicket partnership of 107 was the highest since this scorer began his reign in 1991. Meanwhile in the scorebox, this scorer and his disconsolate colleague had achieved an honourable draw in the swapping of cricketing trivia but, although one side had to lose, it had been an absolute privilege to witness this fine match and one of the greatest innings to be played on the famous old ground.