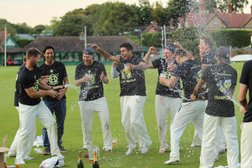 "The fielding again had been first-class but, was 192 going to be too many on a track that, in the words of one of the umpires, was ‘very up and down’."

On a considerably warmer but nevertheless cloudy day, Beckenham assembled for the first home Premier match of the season and welcomed, fresh from the Indian Premier League, all-rounder Stuart Binny. Skipper Alex Senn lost the toss and Bexley opted for first use of a firm, straw-coloured pitch.

Former Indian Test player Binny took the new ball and immediately impressed with his easy approach, fine action and brisk pace, hitting an immaculate line right from the start. Bexley openers Calum Basey and Shaun Evans batted cautiously with MacVicar bowling well at the other end. There appeared to be little pace in the track and runs were being earned. As the innings progressed, Basey began to get into his stride with some fine shots and reached an excellent fifty in 66 balls. Beckenham had to wait until almost the halfway stage before the first wicket fell at 70, courtesy of Shojib Ali, replacing MacVicar, who induced a steepling top-edge from Evans which was thankfully held by the bowler. As Basey began to accelerate in company with Matt Stiddard, another 38 runs were added before Ali struck again by trapping Basey in front for a fine 63.

After a spell of spin from Johan Malcolm and Mudit Dayal from the pavilion end, Binny returned and immediately struck with a brace of wickets in his first over to leave the visitors on 135-4. The second of these wickets was due to a magnificent diving catch by keeper James Balmforth. Sandeep Bains, returning to League action after a gap of a few years, showed he had lost none of his batting skills as he gave great support to Stiddard until the latter was run out through a great throw from Malcolm who then added a wicket, thanks to a superb running catch on the mid-wicket boundary by Binny to get rid of Bexley skipper Adam Riley. With Will MacVicar returning to the attack, two wickets fell to the all-rounder when he trapped Bains for 17 and then bowled Foster for 2. With the overs ticking away, there was just time for Binny to add another scalp as he castled Ashraf in the penultimate over.

This had been a fine performance in the field from the home side with Binny taking the plaudits for his 3-20 with MacVicar and Ali bagging a brace each. The fielding again had been first-class but, was 192 going to be too many on a track that, in the words of one of the umpires, was ‘very up and down’.

The Beckenham reply was not an easy one with Finnan Bryan still trying to make his mark for his new club. The Bexley opening attack of Jason Benn and Junaid Ashraf were not easy to get away and it was Benn who struck first when he had Bryan held at slip by Riley. Worse was to follow when, on the same score of 20, newcomer Junaid Ashraf had Senn nibbling at one to give Calum Basey a regulation catch behind. Much now depended on the partnership between the prolific MacVicar and new arrival Binny. Riley rested Ashraf and, shortly before resting Benn, Bexley’s former captain took the prize wicket of Binny when he had him leg before for 10 which had included a couple of superb boundaries which gives promise of much to come in the ensuing weeks. Johan Malcolm joined MacVicar as Riley paired himself with the left-arm spin of Freddie Foster but, with neither batsmen managing to dominate the bowling, the run rate was never able to achieve a great deal of momentum. Nevertheless, a solid partnership of 58 was put together before MacVicar holed out to Stddard off Foster for 26 and then Malcolm followed in the next over, leg before to Riley. Foster struck again at 96 before a bright stand of 37 between Matt Balch and young Harry Jones (14) was ended by the return of Ashraf who sent Jones packing to be followed by Balch for 25. Balmforth (19*) and Dayal (5*) took Beckenham closer to the target but Bexley were worthy winners by 24 runs. This was an unfortunate end to Beckenham’s promising start of four straight wins including friendlies but the big worry is the fact that the batting is not getting off to a good start which places a lot of responsibility on the middle order.