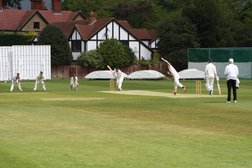 Yet another chilly May day with the likely prospect of the Beckenham scorer freezing his proverbials off, the 2017 Premier champions made the trip to the Rectory Field, home of the 2018 Premier champions, who have been regular opponents of Beckenham for almost the whole of its 153-year history.

With Alex Blake stood down by the County and general unavailability, it was with a rather depleted bowling attack that skipper Alex Senn had at his disposal. Winning the toss, Senn had no hesitation in inserting Blackheath on a grassy pitch that was reasonably firm. ‘Heath opener George Wells unleashed some scorching drives in the opening salvoes and then Shojib Ali and Will MacVicar settled down to ensure that runs would have to be earned. As Mukerjee dropped anchor, Wells continued to put bat to ball until he sliced one straight to Jason Bilimoria at third man for a simple catch. MacVicar then accounted for the dangerous Tanweer Sikandar, trapping him in front for 1 before Ali struck again having Charlie Sid-Speller well held by Johan Malcolm at slip – 43-3. To make matters worse for the champions, MacVicar struck again to end Mukerjee’s vigil with a regulation catch behind to James Balmforth.

Jason Bilimoria then replaced MacVicar and began a nicely-controlled spell of off-spin which brought an almost immediate reward when ‘Heath skipper Chris Willetts edged behind to Balmforth. As Richard Fleming tried desperately to hold the innings together, Bilimoria removed another key batsman when Dipayan Paul was nailed in front to leave the home side in terrible trouble at 77-6 at the halfway stage. Senn, meanwhile, had made the brave decision to bowl Ali out and he was replaced by Malcolm who bowled a tight spell of off-spin before giving way to Mudit Dayal’s leg-spin (and he’s paid his sub ALREADY!). Jahid Ahmed joined Fleming but this normally free-hitting batsman found himself unable to force the pace due to the tenacious visitors’ bowling and excellent fielding. A gritty stand of 53 was put together by the pair until Dayal struck in the 40th over when Ahmed ran out of patience to edge behind to give Balmforth his third catch. Mehdi Abbas tried to up the pace but lost partner Fleming lbw to Dayal for a painstaking 33. Then came a suicidal attempt at a run which left Abbas stranded and an easy run out for Senn which prompted an ‘abuse of the equipment’ event giving Beckenham the bonus of a 5-run penalty start when they batted. With Bilimoria having pulled up with a tweaked hamstring, Malcolm returned and soon wrapped up the innings for 171. This had been an excellent session for Beckenham with a depleted attack all bowling supremely well and to the plan demanded by skipper Senn. The fielding was first-class and backed the bowlers at all times.

The burning question then had to be whether Will MacVicar could continue his unbelievable start to the season. The Beckenham reply began brightly with Senn quickly underway with a couple of crisp boundaries while Finn Bryan followed suit and showing signs of settling in after a difficult start. But it was not to last as Senn appeared to play around a straight one from Sikandar to depart for 12. As we have come to expect, MacVicar then joined the fray and immediately showed no signs of being in any trouble as he and Bryan added a further 32 before Mehdi Abbas, replacing Ahmed, hit the woodwork. Dan Hardy then failed to capitalise on his promising start to his Beckenham career when he was caught behind off Ahmed without scoring. New batsman Johan Malcolm immediately made it clear that he would play second-string to MacVicar, his partner being in such irresistible form. Powerful drives skimmed over the lush outfield as MacVicar marched on remorselessly to fifty in 61 deliveries with Malcolm keeping the score ticking over from the other end. The stand gathered momentum with ‘Heath skipper Chris Willetts trying numerous bowling changes but all were powerless to stop the Beckenham pair. Eventually, Malcolm began to emerge from MacVicar’s shadow with some vintage batting and it was he who struck the winning boundary which also gave him a well-deserved fifty with MacVicar 84 not out. This had been another seemingly unexpected victory for Beckenham but it says much for the growing team spirit that Alex Blake arrived early to supervise the pre-match training and remained for the whole match. Mention should also be made of long-standing Beckenham stalwart Neil Simpson who, dressed appropriately against the cold, gave staunch support as always.