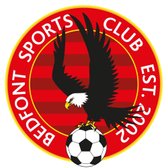 We are delighted to announce that Mark Osborne our Bedfont Eagles U15s manager will step up and join the management team of the Bostik youth team at Bedfont Sports. Mark has been working alongside Stu Brown this season and after talks between Stu and Mark, Mark will officially become the Assistant manager for our highly regarded U18s Bostik Youth team.

Good Luck Mark and Stu for the rest of this season !!