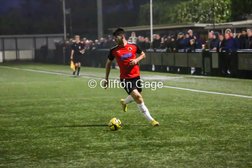 Managerless Bedfont came into this on the back of a horrible run against high flying Chertsey. The early exchanges saw Bedfont get the better chances and Sam Evans was denied by jupp in the Chertsey goal. The 1st half had few chances and at half time its 0-0

Chertsey dominated the 2nd half and Gary Ross was called into action on a number of occasions with his best save coming from a flying one-handed tip over the bar. Sports held on to get a valuable point even at this stage of the season. Now the real work begins as the recruitment of a new manage becomes key for the Eagles.