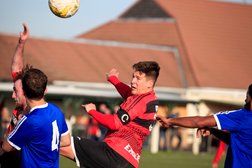 Xmas Fixtures have always been a problem for sports, like everyone else the normal blow outs, no shows and players and managers unavailable meant that Assistant Jimmy Hibburt was left on his own to lead our depleted troops. Hibburt gave a debut to young Joe Smith from the Youth team and also brought back James greenwood after his suspension.

Sports started cagey and the early play was set by north Greenford, however after the opening 20 minutes sports came into life, Bradley Wilson had the bulk of sports chances and it was the wide man who set sports on there way. on half time Darryl Sanders quick free kick caught everyone asleep, Wilsons low shot could not be kept out and it bounced in off the post after hitting the north Greenford keeper on the back.

The 2nd half sports skipper showed his qualities, leading his young troops in what was a real tough test, sports stood strong and held off North Greenford who despite there possession didn't really put Josh Richardson under too much pressure. Sports held firm and secured 3 more points, which gives us 38 points before xmas, a record for us in the ccl premier