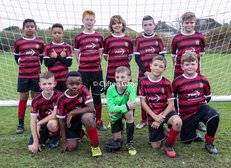 Eagles first game of the season started with a tough away game to Claygate Royal Griffins, It was Eagles first game playing with a nine a side team. Eagles welcomed 4 new players this season, welcoming back Tyrae Smith who had spent a year away and has now returned back to us. Plus 3 new players who we have made the switch from our neighbouring side BedfontandFeltham Fc, we welcome Hari Navaratnam, Rio Butterworth and Andy Makina.

The game was set on a Sunny Morning in Claygate with Danny Beck named as our new captain taking over from Ethan Reuby, the game started with a very Competitive edge seeing this was the first game of the season, Claygate started strongly and were the first to score with a strong shot from open play that was too strong for our Keeper Ethan Reuby, who managed to get hands on the ball but unfortunatley ended in the back of the net.

Eagles came back strongly with a great run from Brody Gregory who hit a fine shot hitting the crossbar, with Captain Danny Beck pouncing on the rebound to score his first goal of the season and equalising to make it 1-1, Bedfont kept up the pressure from the restart and managed to get a corner, a fantastic corner was hit by Brody Gregory and Tyler Neary making a great run to the far post, managing to score with an unstoppable header, putting Eagles in front 2-1 and leaving the keeper helpless.

After the restart the game was very evenly matched with both teams having opportunities, finally ending with Claygate getting the upper hand and equalising from open play making the score 2-2 just before half time.

The second half started with great pressure from Bedfont, with another fine run from Brody Gregory down the left wing hitting a fine cross to Jake Killick who connected with a fine shot and putting the Eagles in front 3-2. Claygate weren't finished and came back strongly with a lot of pressure with some fine defending from our back four, with Oliver Morphew making a fine stop from a clear goal bound shot.

Claygate kept the pressure up and pounced on a goal kick from Bedfont and equalised making the final score 3-3. This was a great first game with both teams playing for the first time with nine players and the inclusion of the offside rule. Well played Eagles and we look forward to the next game. EAGLES!!!!!