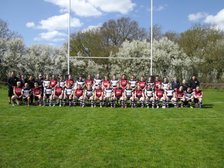 A late rally from Bedford Athletic saw them claw back a 31-all draw at Tunbridge Wells.

Trailing 31-14 with just minutes left on the clock three tries at the death saw an unlikely three points gained and if just one more had been converted an even more unlikely win may have resulted.

Bedford Athletic started well, Rob Watkins stole a lineout, the team exerted pressure and David Simpson charged down a clearance kick which he himself followed up to score, Leo Mortimer converting in the second minute. Thereafter momentum switched to the home side. They started to enjoy long periods of possession and with the visitors conceding cheap penalties this allowed them to also force territorial advantage. With these penalties drilled to the corner attacking lineouts gave them the platform for scores, the first lineout was spread wide for Matt Spicer to touch down and the second heralded a compact driving maul for a try for Christian Earle. Frank Reynolds converted both and at the end of the first quarter Tunbridge Wells led 14-7. Thereafter the game sank into a long morass of reset scrums and stoppages to play broken only by a yellow card for James Yates for retaliation. It was Bedford Athletic who broke the impasse when David Simpson darted his way through the home defence and set Harry Sawford-Smith free for an equalising try on 31 minutes assisted by Mortimer’s conversion. Immediately though an error in possession gifted the ball back to Tunbridge Wells and no.8 Nick Doherty sped away to ground the ball under the posts for Reynolds to convert. This score ensured that Tunbridge Wells led 21-14 at half time.

Early stages of the second half saw more Tunbridge Wells dominance as they took a vice like grip on proceedings. The only score they had to show for it though was a penalty by Reynolds. Nevertheless pinned back by the wind and the accurate kicking of fly half Reynolds, Bedford Athletic were making no headway in the game and indeed were trapped in their own half until the 68th minute. When they did break free it turned out to be a false dawn, as Stephen Woodhead was tackled into touch in the home 22 and from the lineout, the home side drove deep into Athletic territory and finally imposed enough pressure through a sufficient set of accurate phases to score their fourth and bonus point try though Earle again in the 71st minute. With Reynold’s conversion, Tunbridge Wells were celebrating a job well done with a 31-14 lead. Bedford Athletic moved David Simpson into fly half, brought James Yates and Ben Thompson back on to link the play and ran everything. Simpson found the holes, Josh Cassell led the charge and Ryan Taylor finished the first move for the third try on 75 minutes. Now with possession and playing at pace, it was Sawford-Smith who found the next gap and Tom Rees who finished off the 4th and bonus point try on 78 minutes to leave the score at 31-24. With the final play Bedford Athletic once again threw caution to the wind, ran from their own 22 and with the home side on their knees, Harry Sawford-Smith crossed for the fifth try with time expired. Robbie Locke stepped up to slot the conversion for the draw and three points.

With the unbeaten run extended to five matches, Bedford Athletic host bottom side Shelford this Saturday at Putnoe Wood with a 3.00pm kick off.