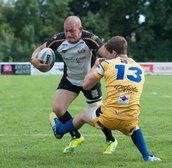 TIGERS PUSH BOUNDARIES OF POSSIBILITY EVEN FURTHER IN 2018

What a season 2018 has been! Ok so we came up short in the East RL Grand Final, but the measure of the club has run FAR deeper than its traditional first team this season.

We'll take a look at all aspects of the club and how it continues to push the boundaries of what anyone thought possible for Rugby League in a heavily Rugby Union area!

We'll start at the top... The club's senior section registered over 90 players in 2018! A phenomenal effort to get that many people to try the switch of code!

And results were reflective. Both first and second teams reached their respective Grand Finals and the first team won the East RL Cup. A feat that meant they have held the trophy for 4 years!

The club has tried to launch junior activity over the years but with varying success. In 2018 the club set up the Bedfordshire Rugby League Foundation which took the innovative stance of actually creating their own micro climate for Junior rugby league in the area.

The formed 3 other "satellite clubs", Ampthill Hornets, Dunstable Dragons and Luton Vipers and put trained coaches into each site to generate a small four team league at U14 and U16 age groups. And the standard did not disappoint with the counties youngsters giving their all each and every week in the unfamiliar game!

A Ground to call Home

After 14 years of playing tenants to the Athletic Stadium and more recently Bedford Ath RUFC the Tigers, this year, moved into a new site which they will run and operate themselves. Having our own place gives the club all the space to continue with their planned development of setting up a club at the University of Bedfordshire and run school programmes during the winter months.

The achievement of having our own ground should not be taken lightly either as it means they are just one of three clubs south of the heartlands who do so! The others being Hemel Stags and Nottingham Outlaws!

Whats Next for the Tigers?

As just mentioned, the club will continue to lay solid foundations within the fabric of the town with its proposed University link and schools program.

On top of that the Juniors activity is set to double next year with the generation of a further two age groups at each club in order to expose more youngsters to the great game of rugby league!

All of this focussed development is creating a very bright future for the club and is opening doorways that many wouldn't have thought possible for the small club from a rugby union town!