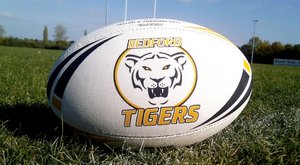 A huge year lays ahead of us in 2019 with promotion and expansion the key buzz words around the club!

The Tigers have made giant strides in the past couple of years, not least with the move to a new home ground which will now enable to the club to implement a full range of activity from adults right down to juniors and minis!

The 1st team will compete in its highest level of competition in its history when they kick off against North Herts Crusaders in the newly formed Tier 4 Southern Conference!

The new competition sits just below League 1 on the RFL ladder and will be a great platform to showcase the club but also a great place for youngsters to aspire to play!

Our Junior Satellite program continues this year with the aim to expand from two age groups to four across all four sites. Ampthill, Bedford, Dunstable & Luton will cater for Under 12, 13, 15 and17s in 2019!

We also hope to attract in other near by clubs to the competition!

With the new playing facilities at the Great Ouse Way we are now able to organise and put on a Schools Program which has been tried in the past with varying levels of success due to the limitations placed upon us by not having access to a ground.

Now the club plans to work with local schools to provide an annual schools cup competition in Bedford and surrounding areas!

We continue our association with Bedford Touch Rugby Club as they put on their annual tournament in May time! More information on this can be found on their website!

And for the guys who thought they'd hung up their boots.... We will once again provide Rugby League at Masters level for anyone keen and interested in playing the odd game!

Women's rugby league has also been an item on the agenda for a number of years but never really come to the fore. However there may be scope this year to trial it and see about sorting a game or two against local opposition!