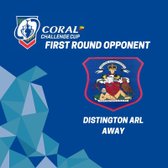 We will travel up to the Lake District to face Cumbrian side Distington in the 2020 Coral Challenge Cup First Round.

The match will take place on the weekend of January 11th and 12th.

Distington, who compete in the Cumberland League, have the honour of being our first ever Challenge Cup opponents and it will be a tough match.

Our opposition have reached Round Two in three out of the last four seasons, with Round Three defeats to Keighley Cougars and Coventry Bears in 2019 and 2018.

More details to be announced shortly.