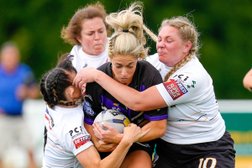 Despite spells of Stirling defence, the inability to apply pressure to a very good London Broncos team meant fatigue was not Bedford's friend.

There are positives in that defensive structures meant that London were forced to work hard for their tries, the majority of which came out wide proving that the Tigresses had the middle of the park locked down.

And Lauren Poole's second half try meant that the girls came away with a reward for all the effort.

"Its been a long season, a disjointed season with cancelled two cancelled fixtures and one team pulling out. This hasn't't helped our continuity but we have developed from last year. And progress is key for us at this stage. We will take stock and regroup in the off season and hit the ground running next summer". Rob Ashton on his side's season in 2022