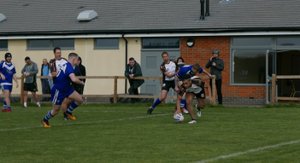 Bedford Tigers welcomed Eastern Rhinos to Great Ouse Way as they kicked off their preseason campaign in what was a tight 20-24 loss for the home side.

A number of injuries to important players throughout the week meant that the Tigers began the game with no recognised half-backs. The opening ten minutes certainly showed that with many unstructured sets not coming to fruition.

The first points off the game came through the visitors as back-to-back penalties led to an easy score on the right hand edge for an early 0-4 lead.

The Tigers believed they had hit back within minutes though as half-back Ollie Fountain managed to win the ball back straight from the kick-off to put the home side into decent territory. The returning Khrys Speed scooted from the play-the-ball and burrowed his way over the line.

The referee pulled the speedster back for being held up over the line.

The equaliser eventually followed as ill-discipline from Eastern Rhinos allowed the Tigers to take full advantage as Fountain twisted his way out of two tackles to dot the ball down underneath the posts.

The Tigers held on strong as the half ticked by, but with the half-hour mark approaching allowed Rhinos to take a foothold in the game.

A grubber kick along the floor by the Rhinos should have been an easy pick up for Alex Tolcan but an awkward bounce caught the full-back off guard and the Rhinos scooped up the loose ball to score. The following conversion was successful and the Rhinos held onto their 6-10 lead until half-time.

The Tigers return to the field after the break with more structure to their play as the arrival of Jordan Marshall and Sam Richbell to the field solidified the side in attack and defence.

A number of high tackles and penalties from the Rhinos put Tigers on the front foot and the ball was spread out to Speed who showed all the Bedford support what they had missed over the last three years and stepped to the outside of one defender and brushed off another to score his first try in a Tigers shirt for around three years. This meant the scores were level after a missed conversion attempt from Ashton.

Ashton made up for the missed conversion with a try of his own on 55 minutes. Bailey Thomas chipped the ball over the top of the Eastern Rhinos full-back and Ashton showed that he did have pace and pounced on top of the loose ball to score just to the right of the posts. He converted his own try to give the Tigers a 16-10 lead.

Eastern pulled a try back five minutes later as weak Tigers defence allowed the Rhinos prop forward to waltz in untouched. The easy conversion was missed though and Tigers held on for a two point lead.

Sam Richbell put the Tigers further ahead with a trademark barraging run as he slammed the ball down on to the try-line after a great build-up set. Ashton missed another conversion and the score sat at 20-14 with 15 minutes remaining.

With the Tigers camped deep into the Rhinos half, the visitors managed to escape down the right hand wing and race 90 metres to score. The conversion bought the scores level with just over five minutes of the game remaining.

A second swiftly followed as the ball was shifted from the left to the right, and a step back across the grain from the Rhinos man gave the away side a 20-24 lead with three minutes remaining.

As time ticked by, Tigers marched up the field, with thanks to ill-discipline from the visiting team and could have scored an equalising try with the last play of the game but Thomas’ kick was just too heavy and the ball bounced over the dead-ball line and the final whistle blew.