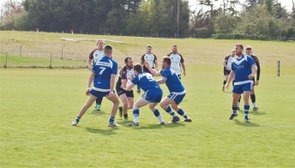 TIGERS SEASON TO KICK-OFF IN HITCHIN

After a bye last week, Tigers begin both their Southern Conference League, and Eastern Premier Division season this weekend,with a visit to Hitchin.

One of those occasions was the East Premier Division Grand Final, with Tiger's taking the spoils in the East RL Cup Final.

Last weekend the Crusaders' were beaten 54-0 by Hammersmith Hills Hoists which should give the Tigers some encouragement as scoring tries has never been a problem.

Despite three losses in pre-season Head Coach, Pat Wilson, remains positive: 'We have had a disjointed preseason where availability hasn't been consistent, but it has allowed us to blood a lot of young lads who are really performing.'

Speaking on what he expects from his players, Wilson added: ' Performances and our desire to do the little things that add up are the key things for me. We have introduced new players and a new playing style to both sides. It's going to take time but I want to see players express themselves and work really hard for each other.'

With the majority of the Rugby Union season finished, Tigers welcome back Jack Saunders and Bailey Thomas from Ampthill duty, with plenty of Swifts, Queens and Bedford Athletic Colts returning too.

There will be no fewer than 10 competitive debuts throughout both squads over the weekend with all players looking to push for a starting spot in either side.

On selection, Wilson said: 'Selection is always tough, but we want it to be, If I wasn't I'd be concerned, to have two squads of 17 players is testament to the hard work Graham (Brown), Rob (Ashton) and Phil (Walker), have put in over the last few years in bring in new blood every year. Competition for places can only make us better.'

Tiger's still have 12 players unavailable, with injuries, representative Rugby Union and personal issues among the reason.

Both squads travel to face North Herts. The East side facing North Herts Knights in the 1pm kick-off with the Southern Conference League game to follow directly afterwards.