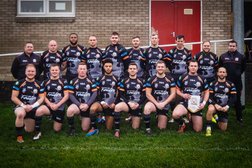 Tigers fall at the last hurdle.

Stags get revenge in Grand Final.

Bedford Tigers and Hemel Stags met for the final time this season and it was another brutal encounter, having previously met twice in the league and also in the cup final, Bedford were ahead 3-0 having won all the games between the sides this season. However this was not the case this weekend.

For the majority of the first half Bedford were in control apart from the first five and last ten minutes, when the intensity of the Tigers dropped just enough to allow the Stags to show off why they are a force to be reckoned with.

The first try of the game came from Hemel after penalties from Bedford allowed the visitors to complete a full set of six inside 20 metres of the Tigers try-line and the kick on the last was pounced on by the Hemel stand-off.

Bedford didn’t let that stop them though a showed signs of pulling away after a quick-fire Sam Richbell double put the Tigers 10-6 ahead after 10 minutes and the Stags were looking rocked.

Sean Tribbeck then pushed Bedford further ahead after Ed Strand drew in the winger, releasing Tribbeck to power over the last defender and score in the corner.

This was to be the last scoring act from the Tigers however, as inconsistent refereeing and Hemel class meant that Hemel ran away with the game, Hemel scored 2 interception tries and a simple overlap try before the half had finished, going into the break 24-14 up.

The break didn’t seem to stop the flow of Hemel attacks and penalties though with Hemel scoring three further tries in a shortened second half.

The major talking points of the second half were the yellow cards handed out by the referee. The first was shown to the Hemel Stags prop Higgs for punching and the second was to Bedford winger Charlie Palmer who when trying to avoid the player who had just scored by jumping over him, and accidently kneeing the player in the head.

From this moment onwards the referee had lost control of the game and with a man down, Bedford conceded two further tries which made the scoreboard read 14-40 in favour of Hemel with 25 minutes to go.

The game was then called off early just 5 minutes after the last Hemel try when Sean Tribbeck collected a kick through and was tackled high by a Hemel player. The tackle was a stiff forearm to the neck, and with the ambulance having to be called, the referee decided to end the game there.

The Tigers will next play on September 3rd in the Harry Jepson Trophy with their opponents yet to be announced.