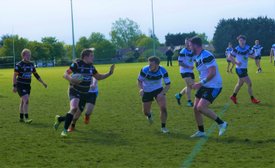 Just like in the game before, the home side opened the scoring after a laps on concentration from the right side of the Tigers defence.
This gave Crusaders an early 6-0 lead but it would be the only time in the game that Bedford would not be ahead.

Ill-discipline from North Herts meant that the Tigers camped inside the 10 metre line and piled the pressure on.

A hard carry from Dan Ridge left the Crusaders on the back foot which allowed Jordan Marshall to burrow over from a metre out.

This time Ben Hardman powered over the try line but managed to twist out of the tackle and put the ball down.

Rob Ashton converted both to give the Tigers a six-point lead.

With the Tigers on-top and many errors being missed by the referee, Head Coach Pat Wilson let his voice be heard.

However, he was sent off by the Referee after saying a word too many towards to official.

This would not affect his side as within five minutes, Lee Walker had grabbed himself a try.

The half-back chipped in behind the Crusaders line and with no full-back present, Walker collected his own kick to touchdown underneath the posts.

The first points of the second half as an inside ball to Luke Blackman who raced clear to score.

Tigers ceased control of the game once more but a bad head clash between Marshall and Hardman left the loose-forward out cold.
Hardman would not return to the field.

His absence would not affect the Tigers too much as within minutes they were back to scoring tries.

Another chip over the top bounced awkwardly for the North Herts full-back but perfectly for Scott Aspinall who collected the ball and slammed it down for his first try in Bedford colours in a long time.

Another lack of concentration from the Tigers allowed Alex Nolan to skip through a large gap. Ben Doughty converted to cut the Tigers lead to eight.

With twelve minutes of the game left to play, North Herts winger, Joseph Nasaucoko was sin-binned for a dangerous tackle on debutant Alex Hill.

Tigers forced the goal-line drop-out in the following set and North Herts attempted to go short.

This failed as Rob Ashton took the ball into contact five metres from the Crusaders line.

A quick play-the-ball allowed Walker the time to shoot a pass over to Oliver Askew-Fountain to score his customary try.

With bi-polar weather throughout the afternoon, the heavy rain and hail decided to return in the final five minutes, therefore the end of the game finished with a flurry of knock-ons.

Despite not their finest performance, Tigers picked up the two points which puts them into 4th after game number one.