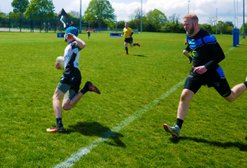 Tigers come up short in in East Opener

Six second half tries from North Herts was enough to see off a spirited and inexperienced Bedford Tigers side.

The opening 10 minutes was all Knights with 2 converted tries coming within moments of each other.

This failed to deter the youthful Tigers backline with Adam Richardson skipping to the outside of his opposite number to score a try on his debut for the visitors.

This seem to spur Bedford on further with Waide Allen breaking through the North Herts defence to get to within 5 metres of the try line.

A quick play-the-ball from Allen allowed another debutant, Alex Harris, to pick the ball up from dummy half and find the space to score.

Allen converted the second of the two tries to make the score 12-10 after 20 minutes.

With moments to go before Half-time, Knights broke through the line once more and with the conversion successful made the score 18-10.

The second half started poorly from a Tigers point of view.

Glen Amos knocked just metres from his own line and from the resulting scrum Knights crossed once more to extend their lead.

What happened next confused most on the touchline and on the field as Aaron Harrison was sin-binned for a punch when many believed he was just wrestling to get out of the tackle.

While Harrison was in the bin, Knights ran in another try to give themselves a 20-point lead.

Amos then atoned for his errors by crashing over the line to Tigers back in the game.

Three quick-fire converted tries followed as the Knights used their experience to put the game to bed.

However, the Tigers weren't quite finished when it came to scoring as Aaron Harrison found himself running through a dogged North Herts defence on the back of multiple penalties. Alex Smith converted to make it 48-20.

With 20 minutes still to play, the Tigers were on the front foot but failed to make any chances count as the slippery ball and ground under foot meant that handling errors were a regular occurrence.