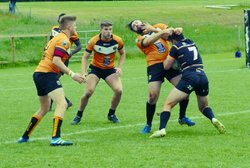 As in every other game this season, Bedford started slowly and allowed their opponents to score first. The Bulls prop-forward Tom Chipchase wrestled through a tackle on the half-way line and galloped clear to score to the right hand side of the uprights.

Despite the early score, the Bulls couldn't take a grip of the game.

Grant Wond took the first carry from the kick-off and opened up the Bulls with a barraging run to set up a perfect attacking set.

Wide play allowed Charlie Palmer to get within five metres out the line and a quick play-the-ball gave Rob Ashton to find the gap in the line and dive over. Ashton converted both for a 12-4 lead.

Tiger's third try was all down to a clever move from Oliver Askew-Fountain.

Josh Spearing's fifth tackle grubber kick was gathered by Bull's full-back Jaryd McCormack but Fountain trapped his opposite number on the try-line and stripped the ball from McCormack to score a third try in less than 10 minutes.

Brixton were the next to score as Jack Hancock scooted over from a short distance.

However, one more try was the follow for Bedford as the ever-reliable Sam Richbell powered over to put the Tigers in a comfortable position before the break.

The second-half started just as the first had ended as Sam Richbell crashed over for his second of the afternoon.

Bedford started to take an even tighter grip of the game as a Jordan Marshall break set-up a two on one against the Bulls full-back and with Ben Hardman to his left, popped the ball off for the loose-forward to score under the posts.

Spearing then converted for 32-8.

Jack Hancock then picked up his second of the afternoon for a Bulls as a lapse in concentration from the Tigers allowed the half-back to step inside and score.

Josh Hudson-Lett then picked up his brace as the Tigers spread the ball from the left edge to the right and the young winger dived over in the corner.

Tom Chipchase then picked up his second of the afternoon for the visitors after breaking through the Tigers defence close to the line.

Bedford were determined to get the last laugh though.

Spearing managed to bounce the ball into touch from the kick-off to regain possession within 20 metres of the Bull's line.

This set the platform for the Tigers to attack Brixton and a fast, flat pass across the face of the defence from Jordan Marshall was gathered by Hardman who held of a number of Bulls players to plant the ball down.

Ashton was successful with his fifth conversion of the afternoon for the final score of the game.