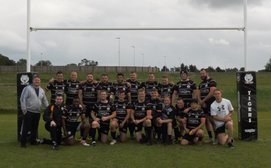 In what was always going to be a physical, and emotionally high encounter, Tigers were always on top against the Stags as they gained revenge for a 0-34 pre-season defeat.

In the opening stages, Hemel came close to going over in the corner but good line-speed on the try-line prevented Hemel from getting over the line.

This defensive pressure lead to Bedford scoring the first try of the game for the first time this season.

The Tigers forced a knock-on close to the Hemel line and from the resulting scrum, Josh Spearing found birthday boy Alex Hill out wide to score his first try in a Bedford shirt.

Bedford were awarded a penalty just to the left of the posts after Hemel did not roll away quick enough.

Captain Lee Walker converted the penalty for a 6-0 lead.

The ever-improving Matt Neild then picked up a second for Bedford as he took a quick tap penalty and catch the Stags off-guard to dive over the line. Walker once again converted for 12-0.

The back-and-forth nature of the game continued as Bedford looked to score once more in the corner.

This time, however, Adrian Chaima just couldn't hold Spearing's pass as the Stags were let off.

Hemel took advantage of Bedford's miss opportunity as they managed to find a gap in the Tiger's line and dot down under the posts right on the half-time whistle.

Josh Spearing extended Bedford's lead 10 minutes into the second half as he skipped out from dummy-half and sneaked over the line for a well-deserved four points.

Bedford's lead was then pushed to 22-6 as a fifth tackle tick from Thomas Henry was collected by Ollie Wright who released Chaima on the left edge, outpacing two Hemel players for a try.

Hemel started to work back into the game after some sloppy passing and slight ill-discipline from the Tigers.

With just over an hour gone, Stags picked up two quick tries to bring the score to 22-16 with around 10 minutes remaining.

With just a few minutes of the game remaining a shot of Dan Ridge by Barry-John Swindells caused the two teams to come to blows with a few punches being thrown.

Both Ridge and Swindells were sin-binned for their part in the melee.

In the closing stages, the Tigers worked the ball towards the middle of the park and from 20 metres out to give the Tigers a 23-16 victory to move up to third.

Next weekend. Bedford travel to the South London Silverbacks in Beckenham. A victory will confirm a place in the top-four in what has, so far, been a wonderful season on the field.