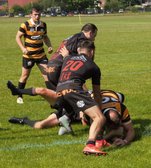 Despite being 22 points down with less than 15 minutes remaining, Bedford managed to pick up an all important point in the race for a top four spot.

Early ill-discipline from the Tigers meant that Silverbacks took an early 2-0 lead through a shot at goal.

This failed to deter the Tigers who stepped up a gear after a sluggish start.

Adrian Chaima picked up the first of his double after the winger picked the ball up from the ruck and burrowed his way over the line.

Bedford then marched up the field to score a quick-fire second as Lee Walker dummied inside, then popped off to Alex Hill, who stepped his man to make the score 2-10.

A third followed shortly after, as the Tigers won a penalty less than 10 metres from the South London line.

Sam Martindale tapped the ball to Ben Hardman who exploited the overlap to allow Chaima to score his second.

Silverbacks would get the final score before the half-time break though as a strong powerful run from their centre was too much for the Tigers.

The opening of the second half, looked bright for the Tigers as the South London number eight was sent to the sin-bin for a high tackle that rendered Ben Hardman unconscious.

As well as the total destruction caused by the Silverbacks, the Tigers went down to 12 men themselves as Josh Hudson-Lett appeared to kick his opposite number in the act of scoring a try, conceding an eight point try.

In protest, Hudson-Lett argued the decision for a yellow card and the referee sent the young winger off instead.

The free-flowing rugby from the Silverbacks followed as the Bedford defensive effort faltered.

With just 20 minutes remaining, Tigers found themselves 38-16, and a man, down and were on their way to an embarrassing defeat.

A grilling from Head Coach Pat Wilson certainly stayed in the players heads though as the fightback began.

The ever-reliable powerhouse that is Sam Richbell took the game into his own hands by charging through the Silverbacks, not just once, but twice.

Lee Walker converted one of these efforts to put Bedford 12 points behind with less than five minutes remaining.

The inspiring attacking play was coupled with a step-up in defensive efforts with Bedford keeping South London camped inside their own half.

Matt Neild made everyone believe just that little bit more as he took full advantage of a quick play-the-ball by Rob Ashton.

The centre picked up the ball and attacked a huge gap in the Silverbacks line to score.

Before Walker took the conversion, Bedford were told the score was 40-30 with the kick to come, which caused some confusion come the end of the game.

The conversion was successful, leaving the Tigers believing they were eight points down rather than the actual six.

Walker then pulled rank as captain and took control of the ball in the final stages.

After starting a fresh set just ten metres out from the line, Walker decided to run the ball himself and burrowed his way over.

The conversion was a nervy one, as the ball ricocheted off the upright and bounced inside the post to level the scores.

With 40 seconds remaining after the kick-off, Tigers set their sites on picking up another try to win the game but a knock-on in the tackle resulted in the final whistle being blown.

The players were very dejected in the moments after the game ended but after a few minutes, the score was confirmed as being 38-38.

With North Herts Crusaders losing 50-20 at Brixton Bulls, this meant that the Tigers have now mathematically secured fourth place with just a point between themselves and league leaders Wests Warriors.