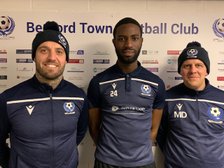 Bedford Town Football Club can confirm the signing of Carl Mensah. The 23 year old central defender has signed a transfer form from Kempston Rovers, where he has been for a part of this season. Previously, he has made 130 appearances for Welwyn Garden City, Tring Athletic, Cockfosters and Colney Heath, scoring nine goals in his career.

Speaking to www.bedfordeagles.net, manager Mark Ducket said "Carl is a good, solid defender, who will add quality and height to our back four. I'm delighted he has agreed to come over and join us at the Eyrie."

Carl's registration is currently being processed by the league and we are hopeful that he will feature in our fixture against Aylesbury United at Chesham on Saturday.