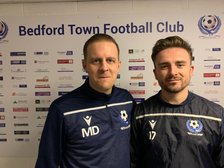 Bedford Town Football Club can confirm the signing of Jamie Greygoose. The 27 year old goalkeeper has signed from Eynesbury Rovers, and we would like to thank them in their assistance with this. Greygoose has previously been with St. Neots Town, Haverhill Rangers and Bury Town before signing for Eynesbury.

His registration is currently being processed by the BetVictor Southern League, and should be available for Saturday's home game against Bedworth United. You can purchase your tickets for this fixture by visiting the club's online ticket store at https://bedfordtownfc.ktckts.com/

Speaking to www.bedfordeagles.net, manager Mark Ducket said "I'm delighted we've managed to bring Jamie in. He is a solid goalkeeper, who I've known for a long time. We were left in a difficult position with Ryan (Schmid) being unavailable for the next two games, and I'm pleased we've got Jamie in."

The club can also confirm that Cade Stephens-Abbey and Connor Coulson have left the club. Both have signed transfer forms for another BetVictor Southern League club and will complete their transfers later this week. We would like to thank both Cade and Connor for their effort whilst with the Eagles, and wish them all the best for the future.