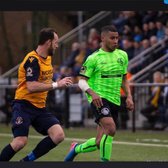 Bedford Town Football Club is delighted to the welcome the addition of two new players.

Firstly, we welcome Leon Lobjoit to the Eyrie. Leon (pictured) is a twenty-four year old striker. He has previously been with Coventry City, Hemel Hempstead, New Bradwell St Peter, Arlesey Town, Queens Park Rangers, Corby and Nuneaton. His most impressive spell came at Buckingham Town, where he scored 52 goals in thirty games, earning him a move to Northampton Town. Leon has completed a transfer from AFC Rushden and Diamonds where he was earlier in the season and we thank them for their co-operation in dealing with this so swiftly this week.

Next to sign is twenty-three year old Jack Vasey. Jack is an attacking player, who prides himself on his commitment to the team and strength in the air. As scholar he played for Barnet before moving to Borehamwood making his first team debut at just seventeen against Brentford in the FA Cup. After getting to promoted to the Conference with Borehamwood, Vasey then left and joined Arlesey Town, scoring twenty goals in their relegation season. Since then, he has gone on to join Royston Town and Cambridge City, losing out in the playoff final for the Lilywhites.

Speaking to www.bedfordeagles.net, manager Jon Taylor stated ‘I have signed Leon to bolster the forward line with the run in coming towards the end of the season. He is a lad with great pedigree and certainly knows where the net is. I have been talking to him for a while, and am delighted he has choosen Bedford Town over a number of other clubs who were chasing his signature.’

Speaking about both additions, Taylor continued ‘Jack is an exicting player, who worked well and performed under Nathan (Abbey) previously. I am hopeful both lads will help us massively in our play off push to get us back to step three.’

Leaving the club is Nathan Frater, who has rejoined AFC Dunstable on transfer terms this morning.

Provided registration checks go through this morning, both players will be available to make their debuts at Aylesbury United this afternoon.