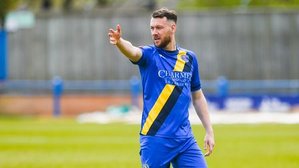 Bedford Town Football Club is delighted to welcome the signing of Rory Mcauley. The central defender arrives at the Eyrie, having had a strong background in the Conference (National League) over the last 15 years.

The 31 year old started his career at Cambridge United, where in eight years he made 151 appearances before leaving in 2014. He then went on to play for Dartford, Chelmsford City and Lowestoft Town between 2014 and 2018. It was in the summer of 2018 he moved to Kings Lynn, winning the National League north and promotion to the National League in 2020. In three years at the Walks, he made 102 appearances, scoring 12 goals.

Rory made the decision to leave Kings Lynn earlier this month, and was officially released from his contract earlier today. Everyone at Bedford Town would like to thank all at Kings Lynn for their assistance in allowing him to move as quickly as possible to the Eyrie.

Speaking to www.bedfordeagles.net, Manager Gary Setchell said "Completing this is a marque signing fo the club. Rory played 17 games in the National League only last season, and won the National League North the year before. He hopefully will be one of the missing ingredients we have been looking for. He is a quality player, who is more than capable of playing at a higher level. Hopefully he will help us to go to the next level too. He knows Pedz (Alex Street) from his time at Lynn, and I'm hoping these two will reinforce our spine, making us stronger and adding great leadership between the two of them."

Rory is currently being cleared by the Southern League and FA. It is hoped this will go through in time for him to make his Eagles debut at home to St Neots Town on Saturday. The Buildbase FA Trophy tie kicks off at 3pm, and you can get your cheaper advanced tickets by purchasing online now at https://bedfordtownfc.ktckts.com/